NextSome contributions from two of our new volunteers, Lexa and Stephen
Uncategorised

We have a new group of intrepid volunteers on site who have survived a slightly lengthy boutre journey and have spent the last few days getting to grips with benthic life forms, BCDs and bok bok. It promises to be a fun expedition, with exploratory diving on new sites for the Marine Protected Area, shark and turtle monitoring trips to neighbouring villages, bird surveys in the spiny forest and, of course, whale watching from our new platform. To tell you more about that, I’ll pass you over to Field Scientist Lea Fennelly, aka Captain Maintenance, who is just back from Nosy Hao…


The day has finally arrived! After three months of meetings, planning and construction the whale watching platform is ready to go. As I get ready to be dropped off on Nosy Hao, the island the platform is constructed on, I feel excited but am plagued with a certain apprehension: what if the platform isn’t high enough; what if there are no whales left; what if they are too far away for us to see them through our binoculars; what if…?! You get the picture, I’m sure. Anyway, as we land on the beach, our first priority is to meet up with the island president to collect the whale sightings data he has been gleaning from his shark fishermen. In one week only seven whale spottings and these guys are fishing 10 miles out – prime humpback territory! We say our goodbyes and walk through the spiny forest, to the western side of the island.

We burst out of the undergrowth some distance from the tower, but are in no danger of missing it. It is by far the largest structure on the island, standing seven metres tall and looks an impressive sight. We scale the ladder and set up camp for the four-hour survey session. Dollops of suncream and vast quantities of water are the order of the day, and once sufficiently greased and thirst quenched we get down to work. After 20 minutes of spying on pirogues (small fishermen’s vessels) and a lone heron, I can feel my doubts creeping back, but these are vanquished by an enormous breaching humpback about three miles in the distance. Seconds later this behemoth is joined by a friend – this time a giant tail fluke flicks out and slams back into the ocean.

For 20 seconds we sat there awestruck, the realisation slowly dawning that this platform is going to be really successful. The locals must have wondered why there were two crazy vazaha on a large platform whooping and hollering at the top of their voices. Anyway, as we follow our whales, another two humpies became evident, bringing the total to four – not a bad start! These showmen play around in front of us for an hour, showing us their complete repertoire of full and half breaching (jumping out of the water), side finning and tail slapping, then head west into deeper water. Over the course of the day we only spent 10 minutes without our cetacean friends, and spotted 10 individuals in total. The most magical moment came around midday when a pod of 25-30 spinner dolphins came leaping past us, and then at the back of the group a humpback tail fluke appeared. I sat there laughing, happy to be part of it all. One o’clock came around far too soon and it was time for us to catch our lift home so we bade farewell to the whales – until tomorrow that is!

That’s it from Lea for now, but expect further whale-related updates in the weeks to come. Next up is a contribution from Lea’s partner in humpback crime, Alan, who has joined us on site as a new member of staff and who was on the platform with Lea for the first day of whooping and hollering. Alan will be with us for around six months, and we all wish him a very warm welcome. His duties on site will be numerous and varied, and will include science training, teaching, working with the ecology club on a new musical, giving guitar concerts, construction projects and being Ashley’s boyfriend.

Arriving in Madagascar is like a tornado – worn out from the trip but wide-eyed with anticipation. I had been sent loads of information and pictures from Ashley who has been here four months already, but nothing could prepare me for the greeting. Ashley was sweet enough to make the trek from Andavadoaka to Tana to meet me and was very easy to pick out of the sea of taxi drivers waiting to take my bags. We spent a few days exploring Tana, collecting supplies for the crew and, with Dave Raza’s wonderful help, getting some paperwork in order. The scenery along the road in Tana was really something: beautiful rice fields, zebu carts and seemingly no traffic laws. The most impressive had to be the Malagasy women carrying piles of bricks on their heads… amazing!

Soon we were off to Toliara where we met Christina, Alex and Noel, our driver from Toliara to Andavadoaka. The drive was again a breathtaking journey along the coastal route – very slow going but perfect for taking in all the little villages and countryside. We made a stop in Salary where Alex treated us to a zebu kebab and chips, then we were off again through the spiny forest and I saw my first baobabs. A thousand pictures couldn’t convey the magnitude of this incredible tree. I was greatly excited to hear these were only small ones – I can’t wait to see the big ones!!

We arrived in Andavadoaka just after dark, but just in time for supper. I have now been here a week and Nahoda has yet to let me down. The staff at Coco Beach have been working wonders to make us feel at home and the entire community welcome BV with open arms. Everyone greets you with a smile, but nothing compares to the Vezo children who really seem to get a kick out of my beard. They also have an incredible perception of harmony, it is so beautiful that it doesn’t matter that I don’t understand the words. Ashley is also having a “kely kely” (little) guitar made for me by Zafy, the BV security guard. He only has one out of three strings on it so far and I can’t wait to add another instrument to my collection.

There is a wealth of interesting research being done here by BV. I have been building reptile traps (we’ve caught a few animals already) and accompanied Lea for the maiden trip to the Whale Watching platform on Nosy Hao. In one day we saw over ten whales splashing and spouting huge amounts of water that were visible way back on the horizon. We also got to watch a pod of about 30 dolphins skimming the surface just beyond the reef. It was a true feeding frenzy.

All this excitement in just the first week, I know my time will pass too fast here but I’m surely going to remember it all vividly. 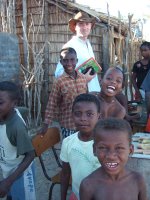 That’s all for now – tomorrow an update from some of our current volunteers. Alex