We are now in the fifth week of this expedition and once again I can’t believe how quickly the time has gone by. I’ll try to sum up several personal highlights from the past few weeks.

We finally had a staff dive to Andravameiky, a 20-30m patch reef a few kilometres off the West side of Nosy Hao. The waters surrounding the reef are much deeper than other areas we’ve dived, making the reef a popular fishing site for deep sea fish species and sharks. It was the first time diving the site for Lea, Abby, Jan, Thomas and myself and we were all quite excited at the prospects of seeing some big fish. Bic had a Hammerhead Shark sighting on the site a few years back, so our hopes were high. We couldn’t have asked for better visibility and within less than 2 minutes Abby was enthusiastically pointing behind me. I was slightly cautious to turn around, and couldn’t believe my eyes when I found myself only a few meters from a huge marlin! It was over 2 meters long and was as surprised to see us as we were to see it! That proved to be the highlight of the dive, although we saw a few Moray Eels, a large potato grouper and an empty turtle shell. Hopefully, we’ll visit the site again. Lea and I are thinking of mapping it as part of our Dive Master Course. 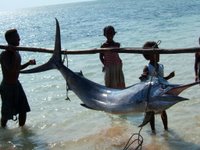 We also recently visited the spiny forest to map the magnificent baobab trees and do some bird watching. We saw several endemic species such as the Madagascar Kestrel, Madagascar Bulbul and several Greater Vasa Parrots. We still have yet to find any sign of the highly endangered Madagascar Teal which may potentially be found in this area. We may have better luck searching once the rainy season comes and a few lakes form in the spiny forest. Right now there is not a drop of water to be found so looking for a duck hasn’t been our most successful venture. 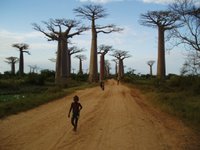 News from the village – The Andavadoaka men’s football team recently took part in a tournament with teams from surrounding villages and returned victorious! A few of our staff members, Thomas and Daniel, were on the winning team. The entire village turned out to congratulate the champs, as they returned on crowded pirogues, singing and cheering. 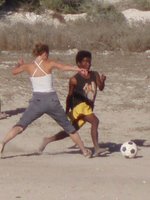 Club Alo Alo, our environmental kids’ club run by Bic, was also invited to the tournament to perform a few conservation-themed songs. Their song and dance numbers went over very well, and they were able to incorporate a few tambourines, shaker eggs and kazoos that my mother, a music teacher in Canada, recently sent out for the Club. Bic has also prepared a song for all BV staff and volunteers to perform for our upcoming Open Day on the 16th September. This is an event where we invite the village to our classroom for a morning of games, slideshows and presentations of BV’s ongoing projects. It is usually a very popular event and this year the locals will surely be amused by us attempting to sing “Janjino soa ra volansezoa, Zaho ananao toy lah manambara, Fara hasao antisika iaby zao baba” (loose translation – “Listen to what we have to say…it’s important to protect the sea!).

That’s all for now, I’m off to a staff meeting, vao-vao (where we will practice our song once again) and dinner. The Copefrito truck arrived today so we should be in for a nice meal tonight… maybe even banana bok-bok for dessert!