NextClean up your act
Uncategorised

Blue Ventures staff and volunteers were out in force on Sunday 9th October as they donned their ‘football boots’ for Blue Ventures versus Veso male and female football matches. The matches were a village event and a large crowd gathered to cheer on both teams. 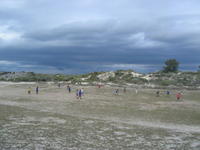 Our ladies made up a full team and put in a fine performance; managing to only lose 1:0. Following this ‘success’ it was the men’s turn: at ½ time the men were losing 2:0 however they ended victorious (by default) as it was claimed that the Andavadoaka team did not want to continue play as the ball was not sufficiently inflated. Confirmation of this version of events is yet to happen!