This week has been a sad one for many on site as it has seen the end of the road here for two of our staff members, Minna Epps and Mark Woodford. They arrived at almost the same time, in September last year, and have worked extremely hard for nearly every waking minute of that time. For Mark it’s been in training tens or even hundreds of divers, from complete novices to divemasters, and in leading hundreds of research dives to survey sites. For Minna it’s been steering our socio economic research programme – and along the way handling most of the project managemment for our marine reserve programme and playing a crucial role in our relations with the village of Andavadoaka and surrounding communities. She will be missed in particular for her work with Malagasy staff, and for her tireless energy and enthusiasm in dealing with local people. 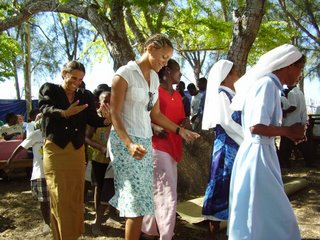 To celebrate their leaving something special was required we felt, and the party we organised was one of the best during my time here. As luck would have it it coincided with party night for the volunteers, so last Friday saw about 40 people for dinner at Coco Beach – all the BV crowd plus friends and project partners from WCS, the cooperative and the village. Messrs Coco and Roger were also in attendance, with their other halves, and after feasting on Nahoda’s cooking and sitting through some tearful and hilarious speeches from the leaving parties there was much singing, clapping, guitar playing and dancing. After a quick tai be interlude for Minna and Mark everyone decamped to the village for a night of exuberant dancing at Chez Dada – a fitting end to Mark and Minna’s time here, and a happy memory for all involved in the party. 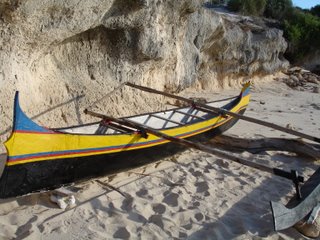 Mark and Minna also had the pleasure of selecting BV’s new pirogue bought last week in Andavadoaka. After a hugely complicated vote the new name was finally selected as Kely kely Tsozo (Little Whale).
Since then we’ve been back on diving, with all the science now finished and the team involved mainly in exploratory and recreational diving. Both boats are out this morning diving a new site that, as far as we know, no human has scuba-dived before – a fishing site that the village of Ampasilva has suggested should be included in the marine protected area under discussion. It could be a pile of rubble, but maybe, just maybe, it’s another Recruitment. I’m keeping my fingers crossed and my eyes out for their return…” Alex Mason – Expedition Manager.